Full disclosure.  I've never been a fan of team sports.

Probably due in some small part to my parents not discovering how ridiculously short-sighted I was till I was gone nine years old.

But also because, as a kid, I was always so painfully preoccupied with the fear of letting my teammates down, that I avoided the prospect of group-based sports activities at every opportunity.

As a more fully-formed grown up though, and with the benefit of some highly effective laser surgery, I think I've pretty much learned to get over myself!

Last week my Year 8 son informed me that he'd been conscripted onto his school's under-13 rugby team to play in a Home match on Saturday - his first ever foray into the world of competitive team sports.

The truth is, although he is half Kiwi (a nation renowned for its rugby prowess),  he's never expressed the slightest bit of interest in the sport.

And, in all honesty, neither I or his Dad have even the tiniest clue about the rules.

Unlike his Mum, however, it turns out that he shows no fear, even in the face of the unfamiliar.

While it may not have been his preferred activity of choice, joining a bunch of classmates for some (mostly) good-natured rough and tumble on a rugby pitch offered the chance for bonding, learning and a good few lungfuls of September morning air.

His team lost 9 to 6. He emerged unscathed.

And they all tucked into sausages and chips for lunch.

Team spirit is one of those intangible qualities that’s nearly impossible to talk about – unless you can offer examples from your sports team. Cheering your teammates on can demonstrate your capacity for enthusing and encouraging your colleagues. Celebrating wins is also important, so make sure you take the time to acknowledge success on and off the pitch. 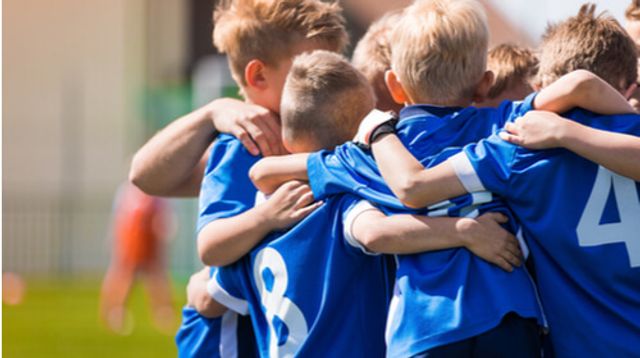 It’s such a great thing for team spirit. We gather around a table, fill up our plates, joke, talk, connect. It’s one of the most special things I have experienced in a workplace. ❤️

can't get their employees to work well together.

What a great pic this is. Not only the obvious, powerful and brilliant connotations for SA, but the ABs captain and senior Lt wait with dignity despite their pain, to congratulate SA players. Powerful !! #rugby https://t.co/f4wSGkg4bB